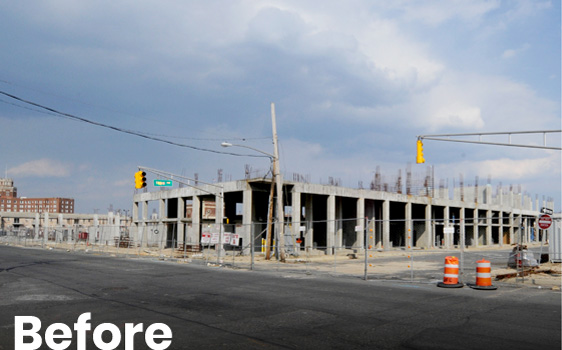 The Asbury Ocean Club represents the single largest real estate investment in the history of the City. With the completion of the Asbury Ocean Club in spring 2019, iStar will erase a symbol of failure that has long existed at the heart of the waterfront – since 1988. The 17-story mixed-use high rise will feature 24,000 square feet of retail space, a 54-room boutique hotel, 130 residential homes and 110 public parking spaces. Lead Creative Director, Anda Andrei of Anda Andrei Design serves as iStar’s Lead Creative Designer for the project. Gary Handel, principal of Handel Architects, is the project’s principal architect.

iStar, in tandem with Sordoni Construction Company, which serves as the general contractor, launched a workforce development program for the local community. In 2016, iStar and Sordoni hosted an open bid event aimed at recruiting local sub-contractors for the project. To date, approximately 20% local labor has been utilized to help build Asbury Ocean Club. Additionally, many local vendors were utilized to supply construction materials. Sordoni also developed an apprenticeship program, giving local residents an opportunity to learn valuable trade skills. iStar and Sordoni also established an internship program so Asbury Park residents could learn about all phases of the construction process. Participants who successfully completed the internship received a $5,000 scholarship. One of the local interns from Asbury Park has continued to work with Sordoni and was offered a full-time engineering job upon graduation from college.

When open, the independent boutique hotel will be operated by David Bowd of Salt Hotels. Building off the success at both The Asbury and Asbury Lanes, and in an effort to employ local residents, the Salt Hotel team will once again host a job-training program, Salt School™ this coming spring. The hotel is expected to employ 80 people.

In total, Asbury Ocean Club is expected to generate more than $2.5 million in annual property tax revenue for Asbury Park. Asbury Park Mayor John Moor noted the immense economic benefit of this special project, saying, “Right now the entire City is generating, in tax dollars, $17 million dollars. This is going to bring us another $2 million per year. That is more than 10 percent of what we are generating right now for the entire City — 1.4 square miles and this is one block… It is a benefit to the taxpayers and in my opinion, and that of our financial and legal advisors, this is a good deal.”